Historical English oaks have an important, daily duty
Are there any nuts growing in Finnish forests?
The bats of Ruissalo: Family life in a breeding colony

The English oak is also an ecological keystone species on Ruissalo, one which countless other animal, plant and fungus species are dependent on. The English oak provides them with food, a habitat, nesting places, protection from predators or a nice hole in which to take an afternoon nap. Even a dead and fallen oak trunk serves for decades as an irreplaceable habitat for a wide variety of fungi and beetles. Without oak trees, these species would not exist.

In Finland, English oaks are found only around the southwest coast; these areas are at the very northern edge of the species’ natural distribution range (the so-called hemiboreal forest zone, which is also called the oak zone). This was not always the case, as right after the most recent Ice Age, around 7,000 years ago, Finland underwent a long warm period, during which oak forests spread all the way up to Oulu. When the climate began to cool again, the oak zone eventually shrank into the current narrow band in Southwest Finland, with the rest of the country turning into taiga, a biome characterised by coniferous forests. If the climate continues to warm, the oak zone is expected to start spreading further inland and towards the north again. 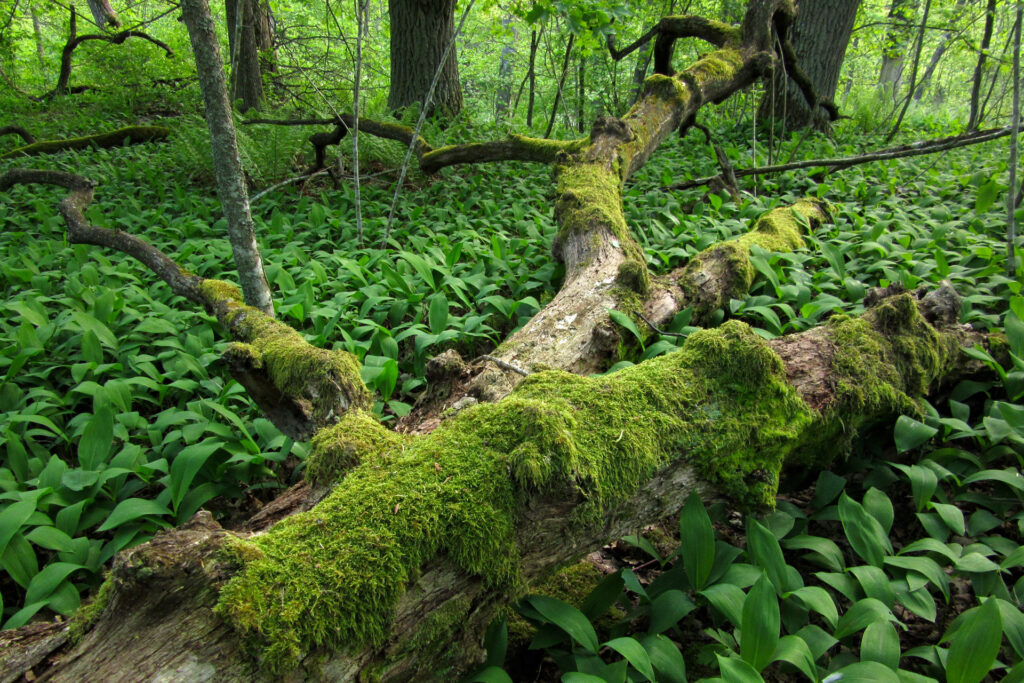 Ruissalo is home to the most extensive English oak forest in Finland, the oldest trees of which are over 400 years old, meaning that they sprouted way back in the 17th century. The life of an English oak may seem boring and stationary, but nothing could be further from the truth! Every summer, the oak grows slightly larger, produces new buds for the next summer and reproduces by growing acorns, each of which has the potential to grow into a new oak tree.

The common hazel is wind-pollinated. It flowers in the early spring, in March–April, before sprouting leaves. This allows the pollen to more easily fly from the stamens to the carpels. The stamens are approximately 5 cm long, yellowish catkins The carpels are small, red tufts less than 5 mm in length. Common hazel pollen causes allergic symptoms in some people. 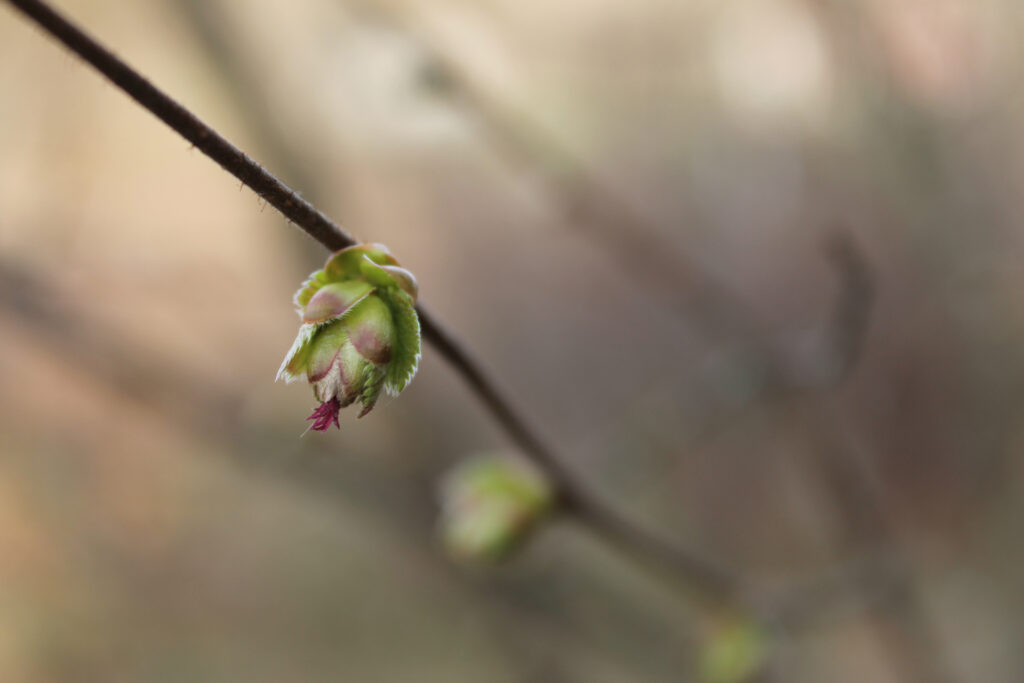 Are there any nuts growing in Finnish forests?

Yes! The common hazel is a species found in warm, sheltered and nutrient-rich hillside herb-rich forests primarily on the south-western coast of Finland. Common hazels are easy to identify by their upright shape, their tendency to grow 10–20 closely clumped trunks and their hairy and soft leaves.

On Ruissalo, baby bats are born after Midsummer, with some species waiting until July before giving birth. A female bat takes thorough care of its young, even interrupting its nightly feeding flights to come by and feed and warm up its offspring. Baby bats develop quickly and can fly within just a few weeks of being born. In late July–early August, they start accompanying their mothers on hunting flights. After the young learn to fly, breeding colonies usually break up, at least in the case of northern bats, with the bats relocating to new daytime hiding places.

Ruissalo’s bright summer nights offer excellent opportunities for bat-spotting against the light night sky. To add another dimension to bat watching, you can use a bat detector, a device that converts the bats’ ultrasound echolocation signals into sounds audible to the human ear. The detector makes bats easier to find, and also makes it possible to identify the species, or at least the genus, of individual bats.

Of the 13 bat species found in Finland, nine have been found on Ruissalo. The northern bat, the Daubenton’s bat, the whiskered bat, the Brandt’s bat and the brown long-eared bat are all common to varying degrees on the island. The Nathusius’s pipistrelle also breeds on Ruissalo nowadays, but the common noctule and common pipistrelle are rare visitors to the island. However, the star of the bats of Ruissalo is the rare and endangered Natterer’s bat, which in Finland is regularly found pretty much only in Turku. 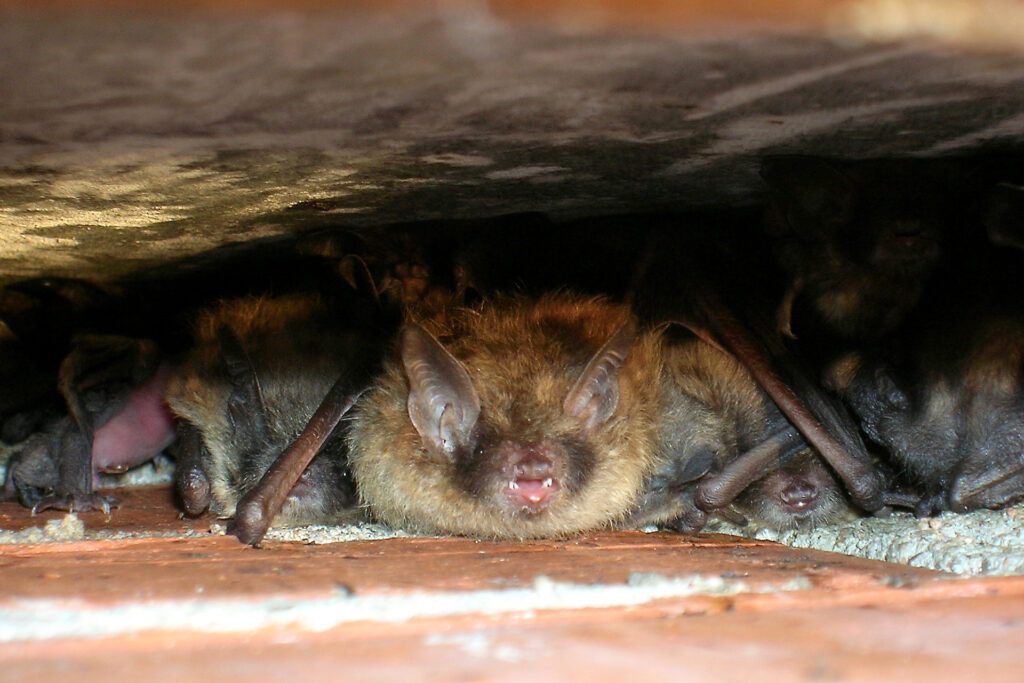 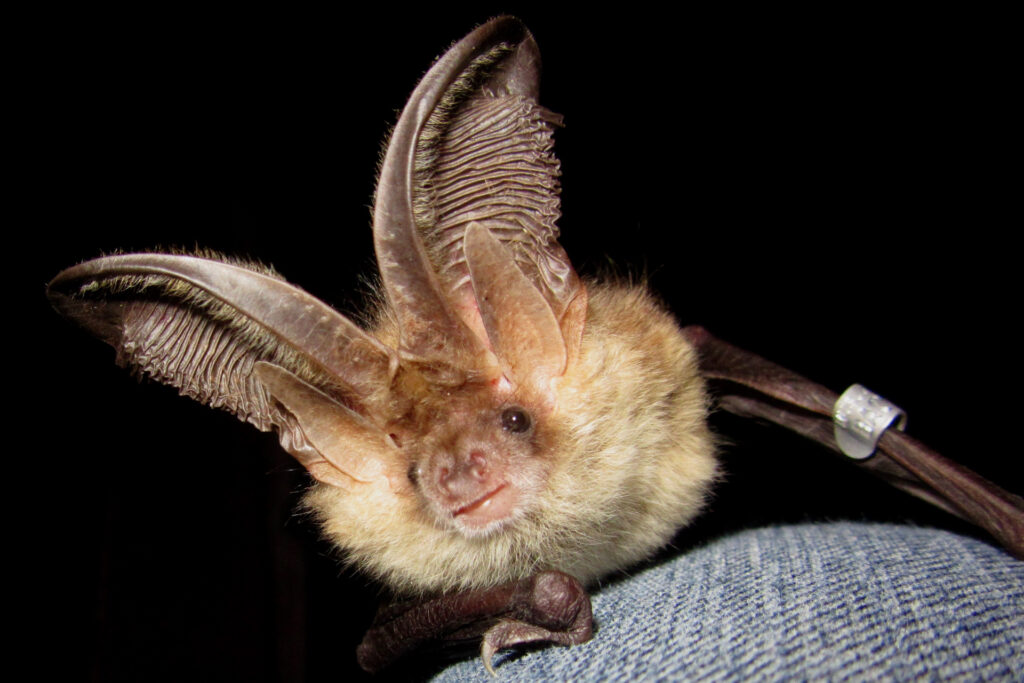 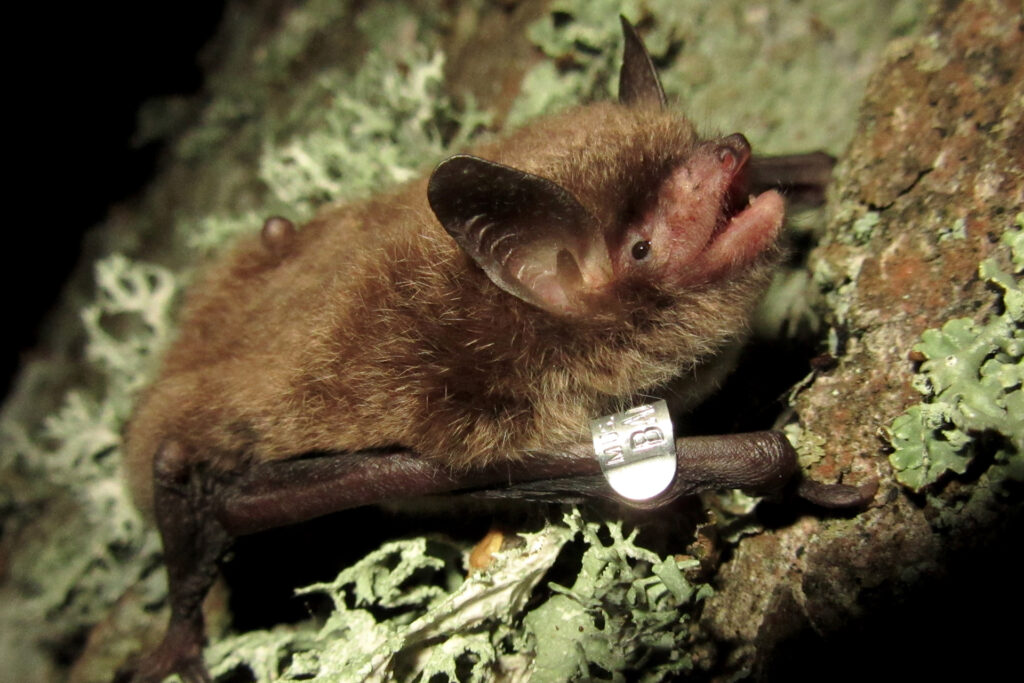 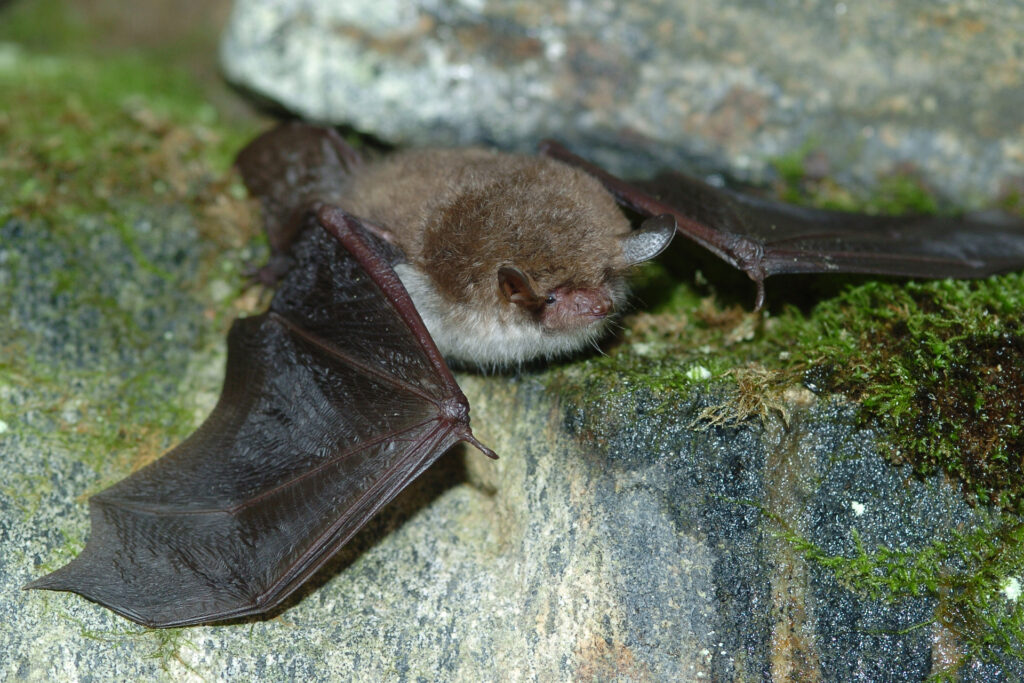 The bats of Ruissalo: Family life in a breeding colony

In late May–early June, female bats gather together to form breeding colonies. The daytime hiding place of a breeding colony is located somewhere warm, such as the attic of a house, a tree hollow or a birdhouse. The same individuals use the same places year after year. Male bats are believed to spend the summer alone or in small groups, but some, such as male Daubenton’s bats, also stay with breeding females.

Efforts to protect the English oaks of Ruissalo date back to the 16th century – though originally the trees were protected as they provided valuable building material. Nowadays efforts to preserve the island’s natural values focus on the protection of herb-rich forests and favouring the English oaks that grow in them. Forest management on the island consists primarily of thinning trees that compete with the oaks. Unlike in the rest of Finland, where the largest threats to oak trees are shading by coniferous trees and acidification, on Ruissalo, the most common threat is the encroachment of Norway maples originating from plantings in the island’s forests. Another important aspect of forest management is the renewal of the oak population, for the purpose of making sure that there are oak trees of all ages growing on the island. Fallen trees are not cleared away, but, instead, left to decompose in place, which benefits the island’s lichen, moss, fungi and insect species. 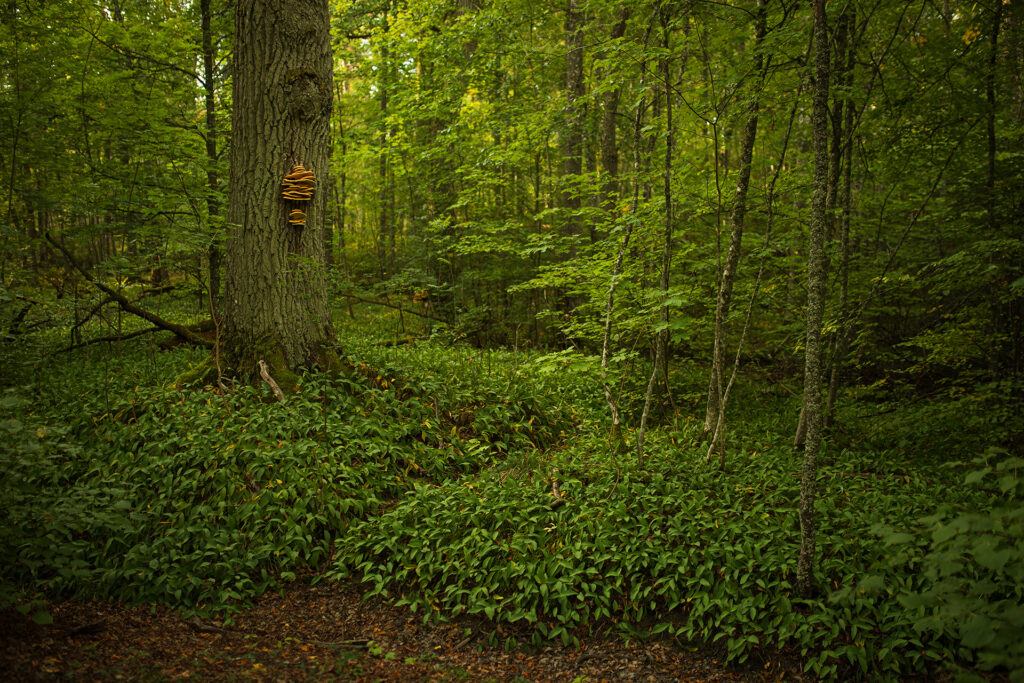 A herb-rich forest in late summer / Photo: A. Kuusela

Ruissalo houses the most expansive and valuable English oak and herb-rich forests in Finland. Thanks to them, the island is also home to many endangered species dependent on oak trees, which are found in only a few places in Finland. The English oak is an ecological keystone species that provides food and shelter to countless other species during its centuries-long life; the number of insect species alone that depend on the oak is over 500. Even after dying, decomposing oak trees serve as important growth sites and sources of nutrition for rare lichens, mosses, fungi and invertebrates. Oak groves are also used as feeding and nesting sites by countless mammal and bird species. The protection of English oaks thus also protects biodiversity and all of these different species. 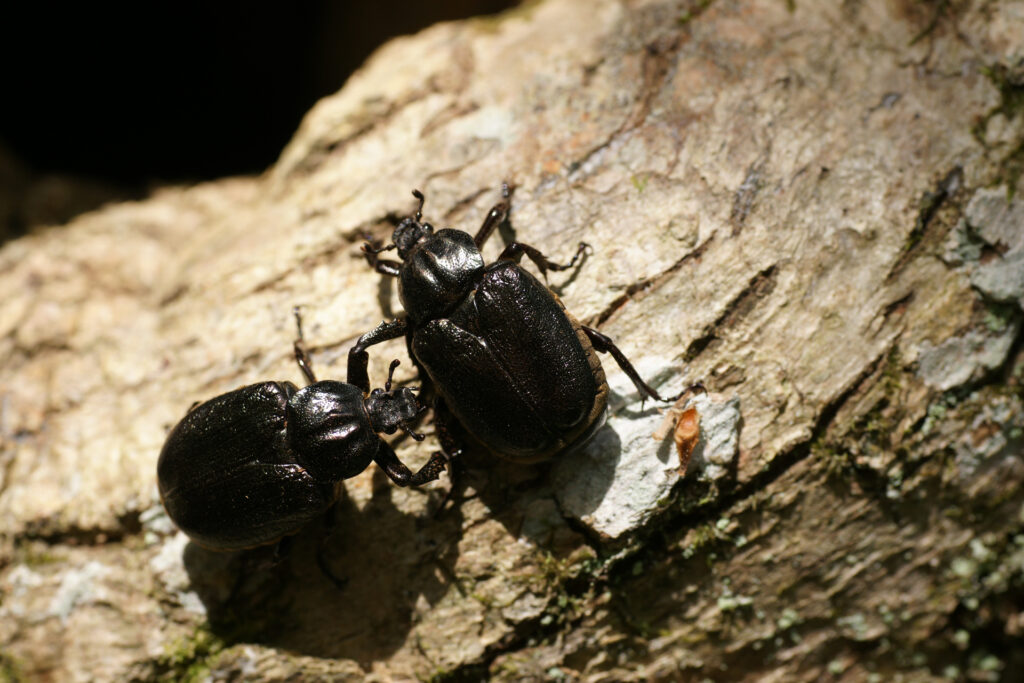 East European hermit beetles live in the hollows of old oaks and other aged deciduous trees, where their larvae eat decomposing leaf humus and other organic matter. The East European hermit beetle’s larval stage lasts 3–4 years. Adult beetles, by contrast, live for only a few weeks. Fully grown adults do not eat at all, focusing solely on reproduction. The males fight over females by pushing each other.

The East European hermit beetle population of Ruissalo has been studied by Matti Landvik, whose excellent doctoral dissertation Isolated in the last refugium ‒ The identity, ecology and conservation of the northernmost occurrence of the hermit beetle was published in 2018. 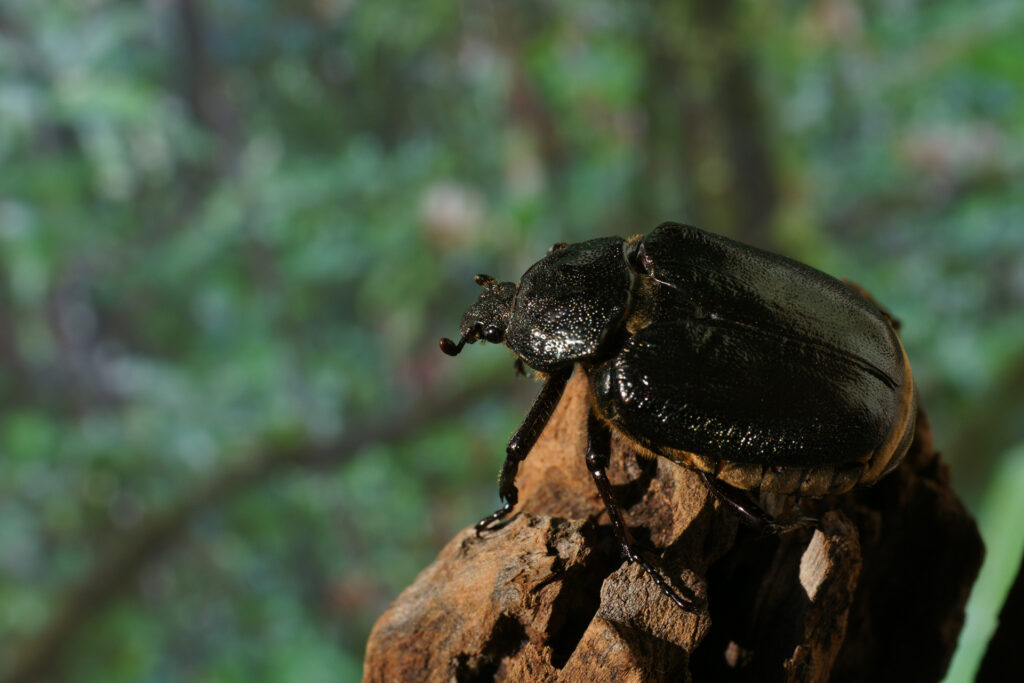 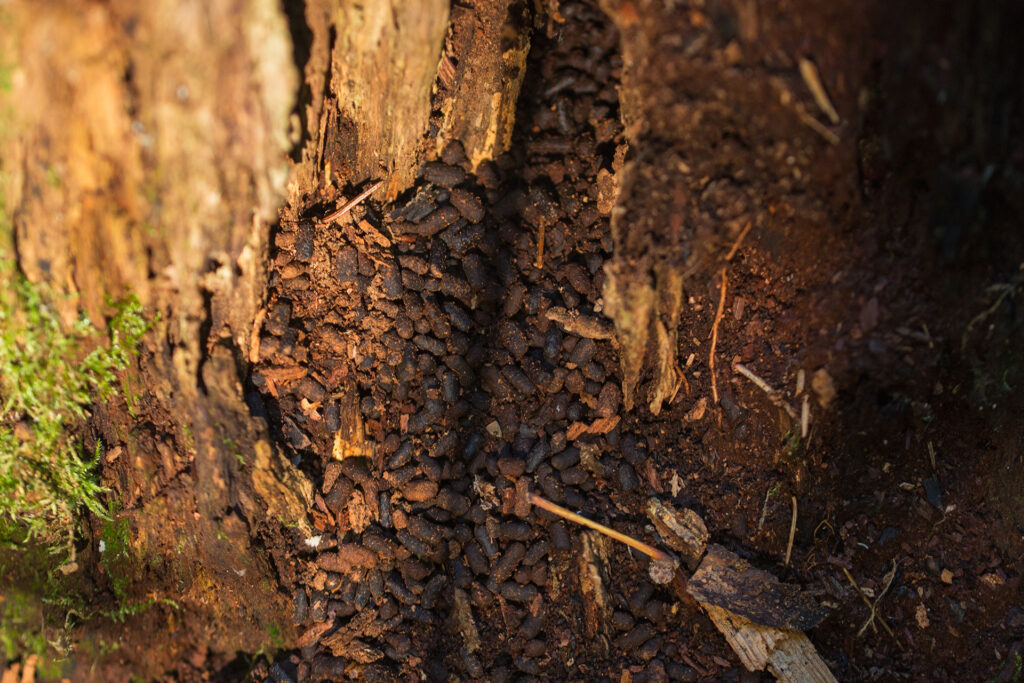 The East European hermit beetle (Osmoderma barnabita) is a large, 3–4-cm-long, dark beetle. In Finland, the species is native only on Ruissalo, in addition to which it is sporadically found in some other locations within a few kilometres of Ruissalo. In other words, the species’ Finnish population lives in complete isolation from other European populations, and it is threatened, protected and classified as a protected species. 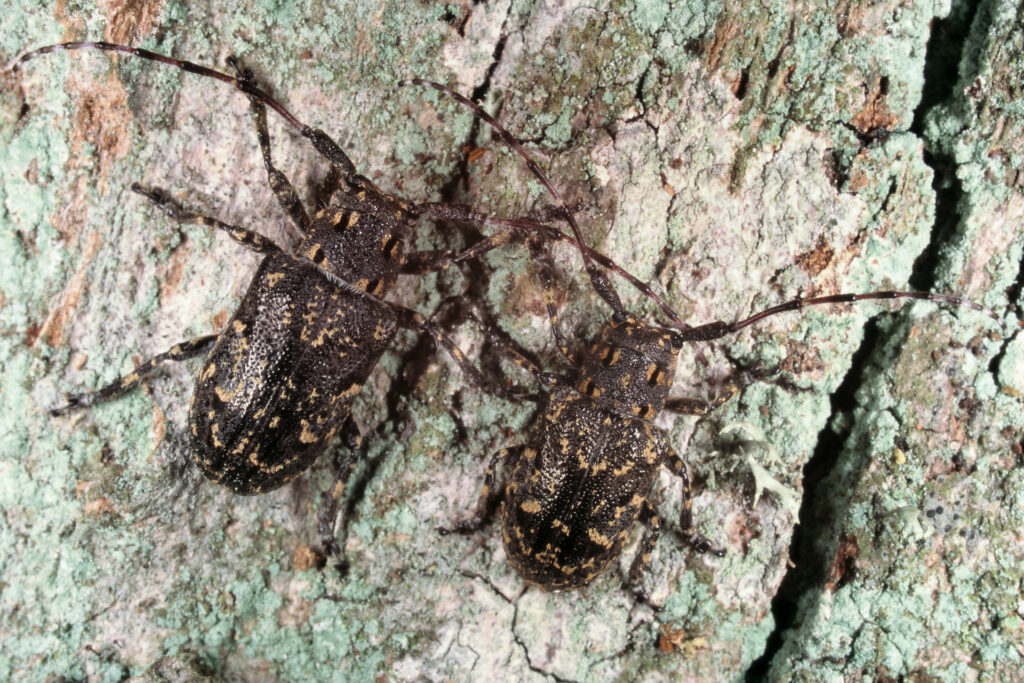 Mesosa myops is a large, grey-mottled beetle with distinct long antennae. In Finland – and the Nordic countries as a whole – the species is only found on Ruissalo. The species is classified as vulnerable and protected. Mesosa myops is completely dependent on the dead trunks of oak and lime trees, which is where its larvae live. The best ways of protecting the species are to leave fallen tree trunks and branches on the ground and to ensure that there are oaks of varying ages in the area.

Mesosa myops larvae dig wide, twisting tunnels in the wood under the bark of the tree. Their larval stage lasts two years.

Deciduous and herb-rich forests are calm, but not lifeless in the summer

Summer days in deciduous and herb-rich forests are quiet, shady and peaceful. However, if you stop to look around and listen for a moment, you’ll discover that there are plenty of creatures around.

Fledglings take their first, fumbling flight lessons, baby squirrels race along tree trunks, beetle larvae dig their tunnels in decaying wood and a branch cracks under the hoof of a roe deer somewhere further away.

Even the most unflinching, long-standing ancient oaks have life in them; their leaves are constantly photosynthesising energy for the tree, which it uses to grow and produce acorns and buds for next spring.