Winter is a time of seeding for many meadow plants

Some plants that flower in the summer wait until the dead of winter before spreading their seeds. Because of this, the dried up and dead stems of these winter seeders can often be seen standing amidst the snow, exposed to the elements. Common winter seeders include the wild angelica, meadowsweet, tansy and goldenrod. These species all release their seeds to be carried and rolled on the snow banks by the winter winds. On even and unobstructed snow, the seeds spread far further from their parent plant than they would without snow cover, when the ground is uneven and strewn with obstacles. The seeds can also hitch a ride on meltwater in the spring.

The cold does not stiffen all small bugs

Most invertebrates winter in a dormant state – as eggs, larvae, cocoons or even adults – and only wake up again in the spring. However, there are also species that remain active throughout the winter under the snow, where they are protected against freezing weather. During milder periods and especially in late winter/early spring, they may also gather in large numbers on the snow to “stretch their legs,” which often confounds skiers and other people enjoying the winter outdoors. One of the easiest to spot is the few-centimetres-long, hairy larva of the ruby tiger moth, as it makes its way across the snow with great determination. Those with keen eyes may also spot spiders, winter gnats, Boreus westwoodi and springtails, which appear as small, dark spots against the snow.

Sometimes the surface of the snow may be filled with little black spots. A closer look reveals these spots to be mobile – the springtails are on the move. Springtails are arthropods measuring only a few millimetres that play an important role in the recycling of organic matter. The reason why they are called springtails is their ability to spring away from predators: they have a tail-like appendage, called a furcula, folded beneath their bodies that launches them into the air when threatened, hopefully carrying them to safety in the process.

The blue hare gained a competitor in the early 20th century when the brown hare spread to Finland from the southeast. The brown hare’s invasion of Finland was also aided by its intentional release into the wild in southwest Finland. However, the brown hare is not as well adapted to snowy winters as our native blue hare. Its brownish winter coat is not as effective as the blue hare’s white one, in addition to which the brown hare sinks deeper into the snow.

The blue hare thrives in forests, while the brown hare primarily prefers fields, open areas and the edges of forests. Even so, there is a risk that the brown hare, being larger and stronger, will eventually supplant its cousin the blue hare. This development is accelerated by climate change, as conditions in winter no longer correspond to the ones that the blue hare has adapted to with its coat changing. As a result, every autumn and spring you can see more and more white hares bounding away from their pursuers across the snowless terrain. The brown hare, on the other hand, fares much better in snowless conditions. 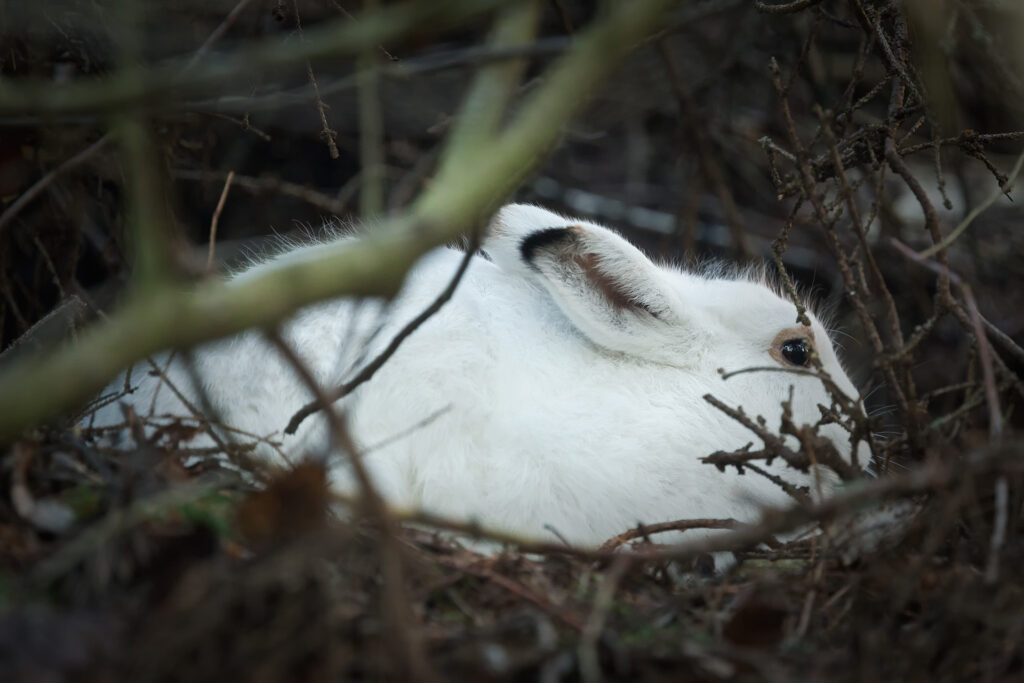 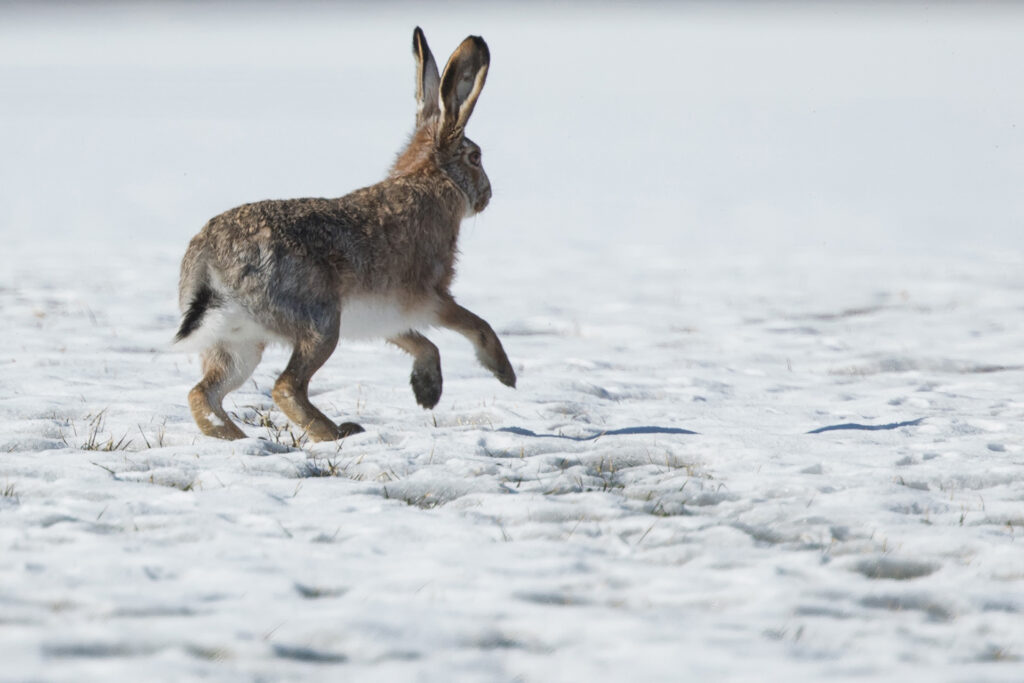 There are two species of lagomorphs bouncing on the snows of Ruissalo. The western part of the island is home to a small population of blue hares, a species native to the area and well-adapted to winter. It dons a white coat for winter, which protects the blue hare from both predators and the cold. In addition to this, the blue hare is able to spread the toes of its hind legs wide, turning them into effective, natural “snow shoes” that keep it highly mobile even in soft snow. 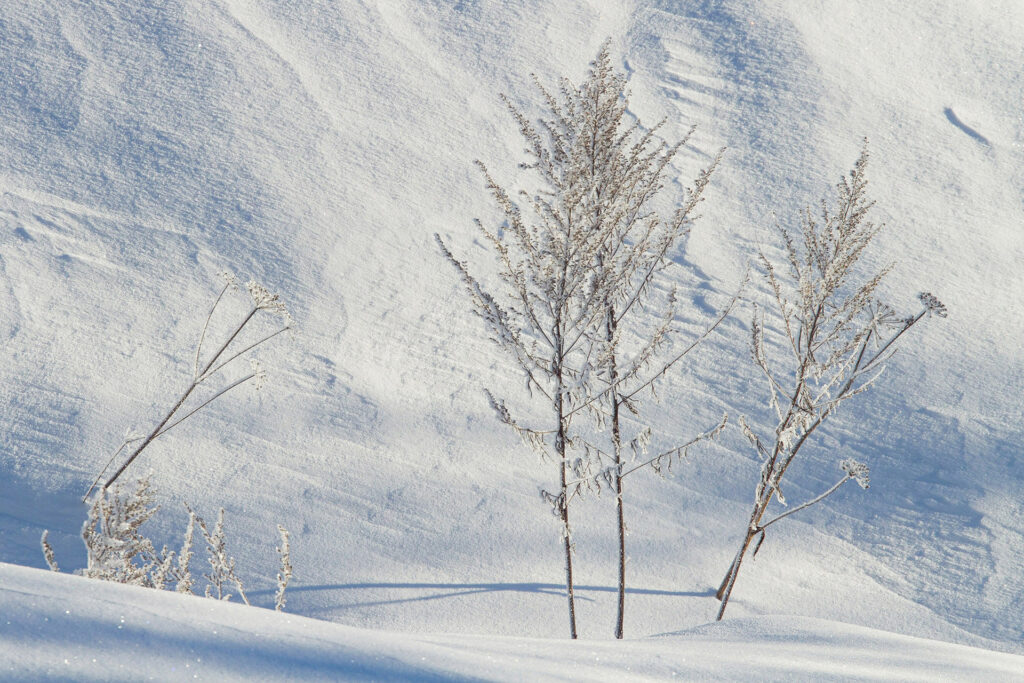 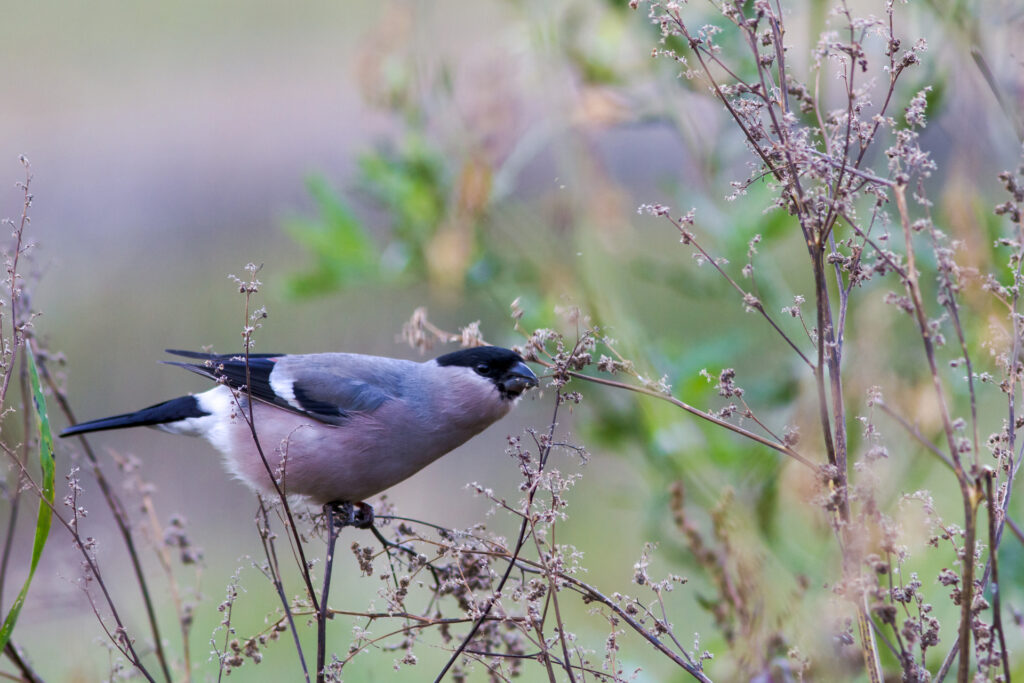 The seeds of winter seeders are an important source of food for many of the birds that winter on Ruissalo, such as European goldfinches, redpolls, greenfinches and Eurasian bullfinches. While feeding on the seeds, the birds also break up the plants’ dried up blossoms, releasing some of the seeds to the winds. Some winter seeders also utilise mammals in spreading their seeds. For example, the burs of the woolly burdock are quick to stick to the fluffy winter coats of animals passing by, allowing the seeds to hitch a ride to a new habitat.