The winter rest of coniferous forests

The inhabitants of coniferous forests all have their own ways of spending winter. While deciduous trees shed their foliage, conifers keep their needle-like leaves all winter. Thus, while both deciduous trees and conifers prepare for winter by storing starch in their trunks and roots and concentrating their cell sap until it becomes frost-resistant, conifers have the advantage of being able to start growing and photosynthesising immediately once conditions become favourable again.

The tracks in the snow can be used not only to identify the animal in question, but to determine what it was doing or where it was going.

In addition to paw prints, hoof marks and bird tracks, animals also leave behind plenty of other signs of life. Moles excavate tunnels in the snow, foxes dig holes to get to their prey, blue hares gnaw on the bark of aspen trees and squirrels drop the remains of the cones that they eat on to the snow. Crossbills, parrot crossbills and great spotted woodpeckers also leave behind the remains of cones that they each eat in their own distinct way.

Identifying winter tracks is both fun and fascinating! The first priority is to identify the species, after which you can focus on following the tracks and droppings to determine what that particular animal was doing. Help in identifying tracks is available online and from special tracking guidebooks. If you cannot identify tracks on-site, you can also snap a picture of both the tracks and some individual paw or hoof marks to identify later. To make identification easier, you should also include a familiar object in the picture to provide a sense of scale. 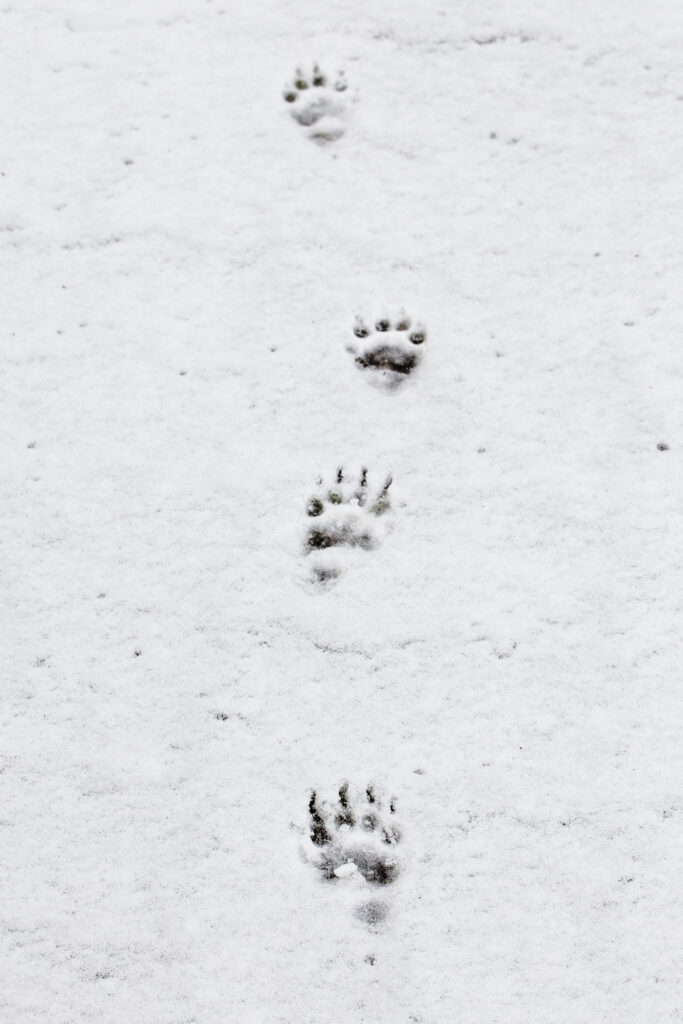 The surface of the snow tells a thousand stories

The tracks criss-crossing on the surface of the snow tell fascinating stories of winter animals and their lives. In the fields, roe deer leave distinct marks as they dig under the snow for grass, and at the edge of the forest the delicate tracks of a small rodent may terminate in an impression left behind by the wings of a tawny owl. The blue hare also leaves distinct tracks in the snow as it leaps erratically to escape its predators, such as the red fox, which leaves a straight line of paw prints in its wake. 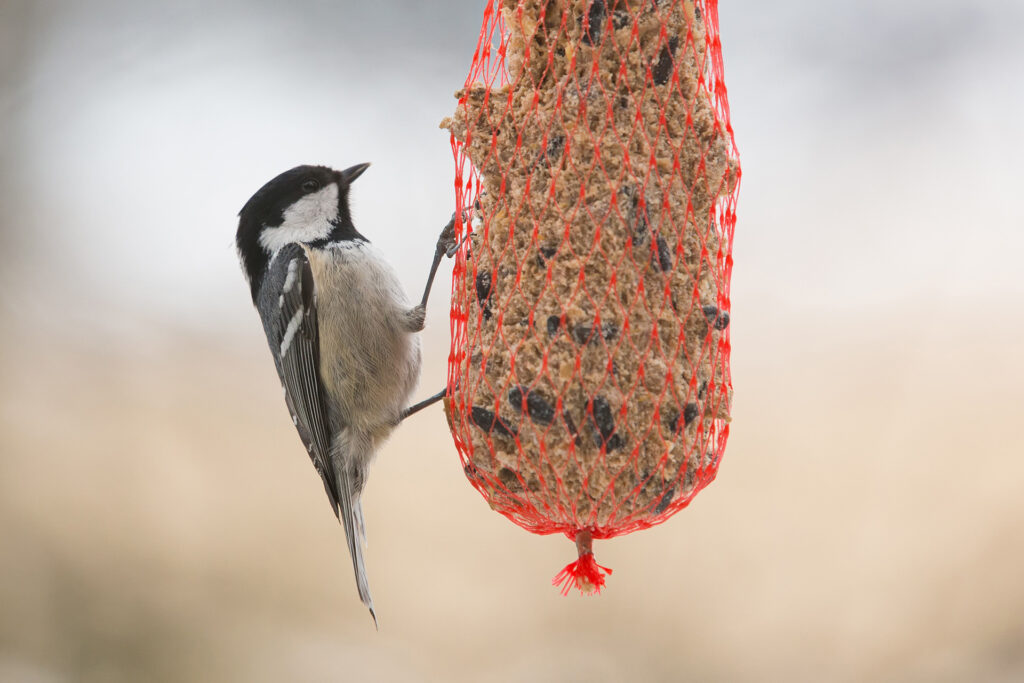 For example, in recent decades the blue tit population of Ruissalo has grown tenfold, while at the same time the willow tit has all but disappeared from the island. One of the factors contributing to this might be bird feeding, coupled with climate change and the availability of bird houses, which the blue tit is more adept in utilising than the willow tit. Feeding spots may also encourage migratory birds to delay their migration or even attempt overwintering. On Ruissalo, bird feeding spots may not be established within the borders of the island’s nature reserves. 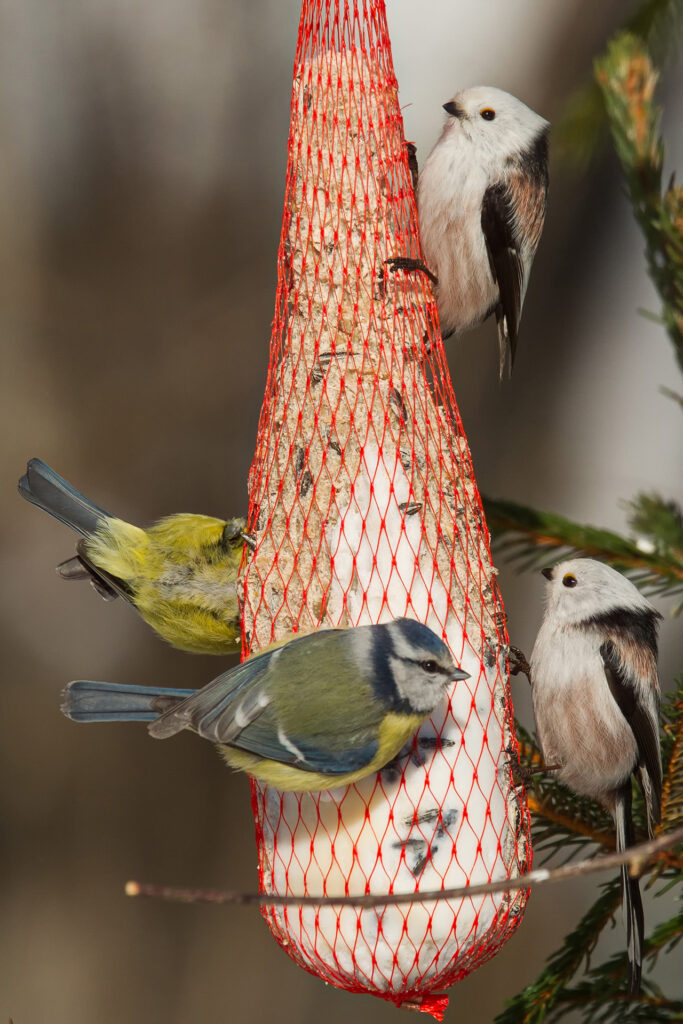 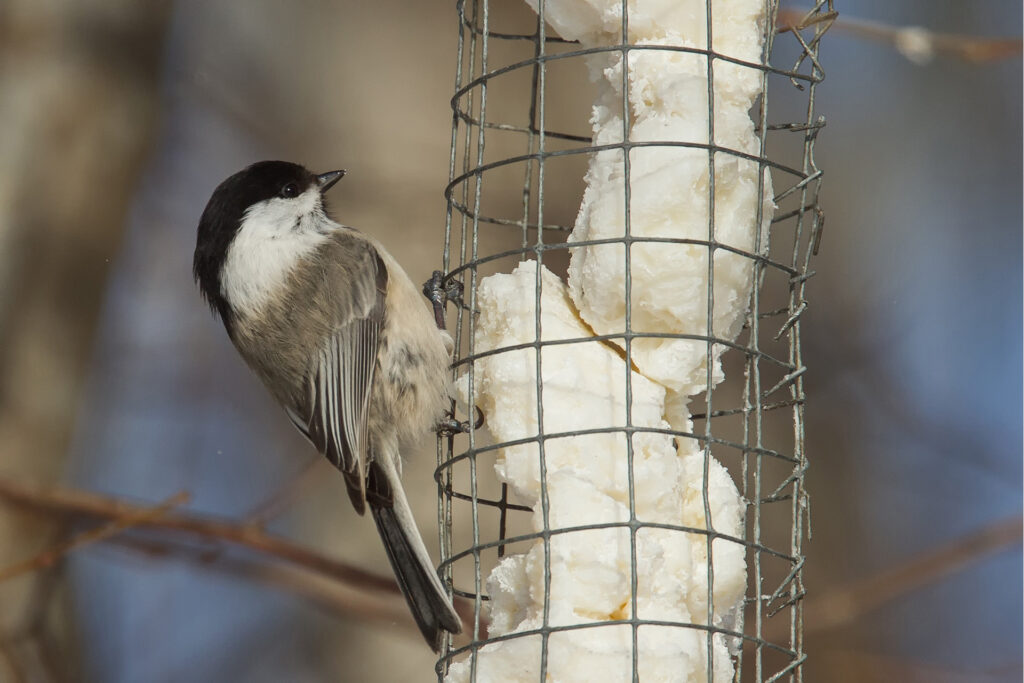 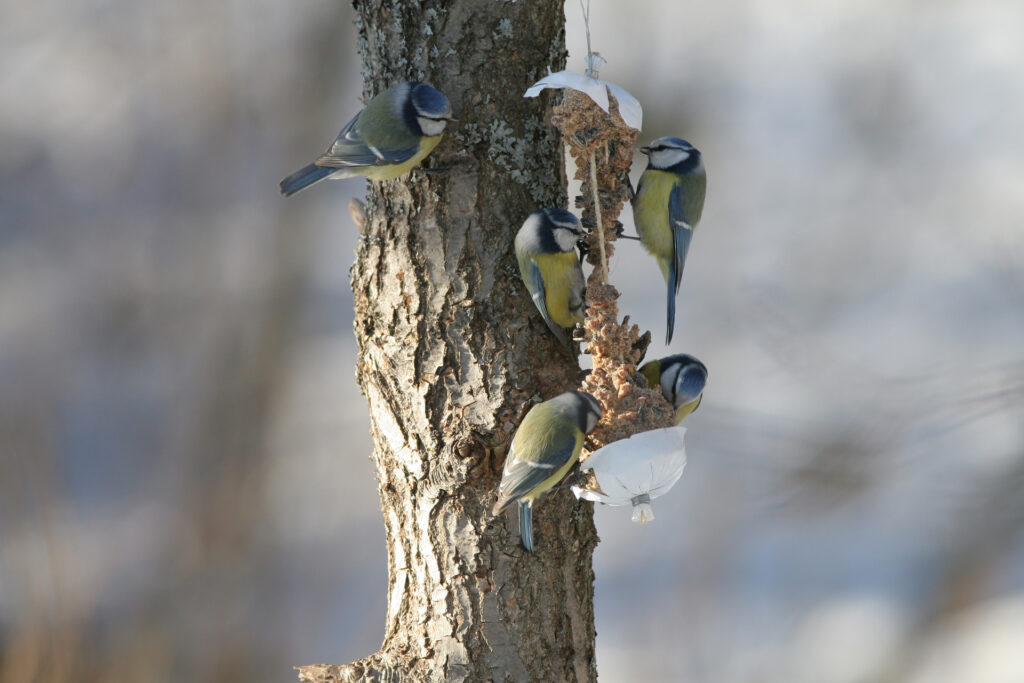 There are several bird feeding locations on Ruissalo that help the island’s birds survive winter. Birds are easy and fun to watch as they congregate to feed, and researchers also make use of these locations in their efforts to monitor bird populations. However, there is also a darker side to bird feeding. Extensive feeding affects different species in different ways. 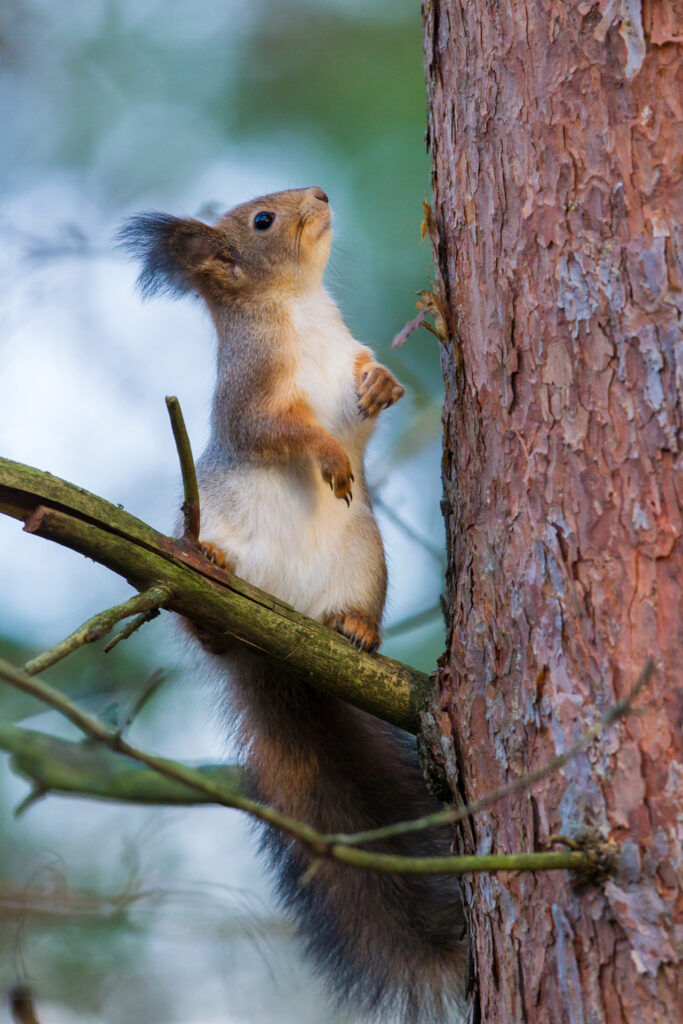 You can gleam a great deal of information about how forest animals spend their winter just by looking at the snow. Blue hares munch on the bark of aspen trees and roe deer dig under the snow for things to eat. Mice, moles and shrews also leave delicate paw prints on the snow, in the rare occasions that they venture out of their hiding places underneath. The pearl string-like tracks of red foxes criss-cross among the trees and Eurasian red squirrels clean cone after cone to get their daily helping of seeds. Every now and then, the silence of the forest is broken by the contact calls of a flock of tits.

Many ways to winter

The dwarf shrubs typically found in coniferous forests, namely bilberry and lingonberry, endure winter under the protection of snow. Herbaceous plants, on the other hand, cannot withstand sub-zero temperatures, which is why their parts above-ground wither and die in winter. They survive winter by spending it as seeds or underground structures, such as rootstocks or rhizomes. Mosses and lichens, meanwhile, are used to such harsh conditions that even spending a few months frozen is not enough to faze them. Once conditions are favourable again, they go right back to photosynthesising.

Even in extremely cold weather, the temperature under the snow never falls more than a few degrees below zero. This allows reptiles to safely hibernate and plants to weather the cold under the snow. Small warm-blooded mammals also spend most of their winter in tunnels that they dig under the snow, only seldom going up to the surface, as evident by their tracks in the snow. Some birds have also learned to dive under the snow to sleep for the night.

When it comes to insulation, the best type of snow is soft, sub-zero snow, which can contain up to 90% air by volume. As such, climate change poses a serious threat to plants and animals that rely on snow to protect them during winter by also making winter weather increasingly unstable on Ruissalo. As a result, the insulating snow cover may end up melting in the middle of winter, turning into water that leaves the ground wet. When the temperature drops below zero again, the ground freezes over, leaving plants and animals to survive without snow cover. 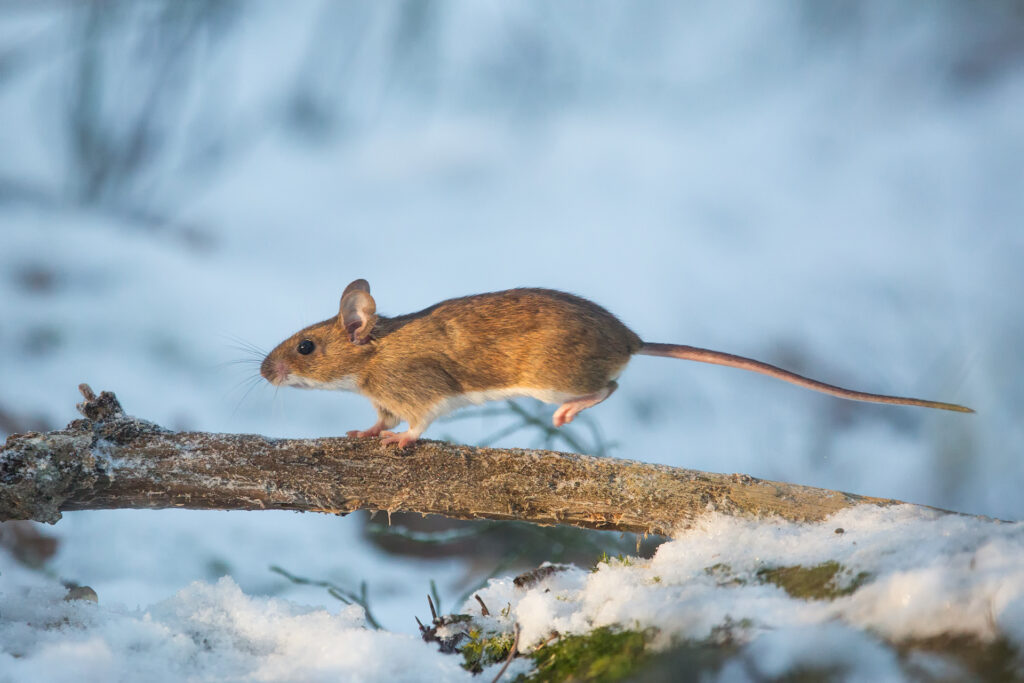 It’s warmer under the snow

Soft, sub-zero snow contains plenty of air, which is effective in trapping heat. In the same way that a down jacket, woolly hat or industrial insulants trap heat, this layer of air acts as an insulator, keeping the temperature under the snow liveable even when the weather gets extremely cold. Additionally, snow also protects against wind; under thick snow, the air remains perfectly calm even in a storm.

Currently, our climate is warming up at an exceptionally rapid rate as a result of human activity. The change is clearly observable: annual average temperatures keep rising, while storms, heavy rains, heat waves and droughts become more and more frequent. As a result, snowy winters in the north have grown shorter and become more unstable.

For species that have adapted to snow, this change is harsh and may even end up being fatal for many individuals. A blue hare bouncing around in its winter coat makes for easy prey without snow around, and if the snow cover melts away in the middle of winter, there’s nothing to protect the animals and plants underneath from the next cold spell. Some species will disappear and be replaced by other ones. A good example of this is the fact that Ruissalo is constantly settled by new southern butterfly species, which serve as living proof of climate change. While plants react slower to the change, the rising temperature will inevitably cause southern plant species native to the hemiboreal zone, such as oaks, hazel and elm, to spread further inland and up north. 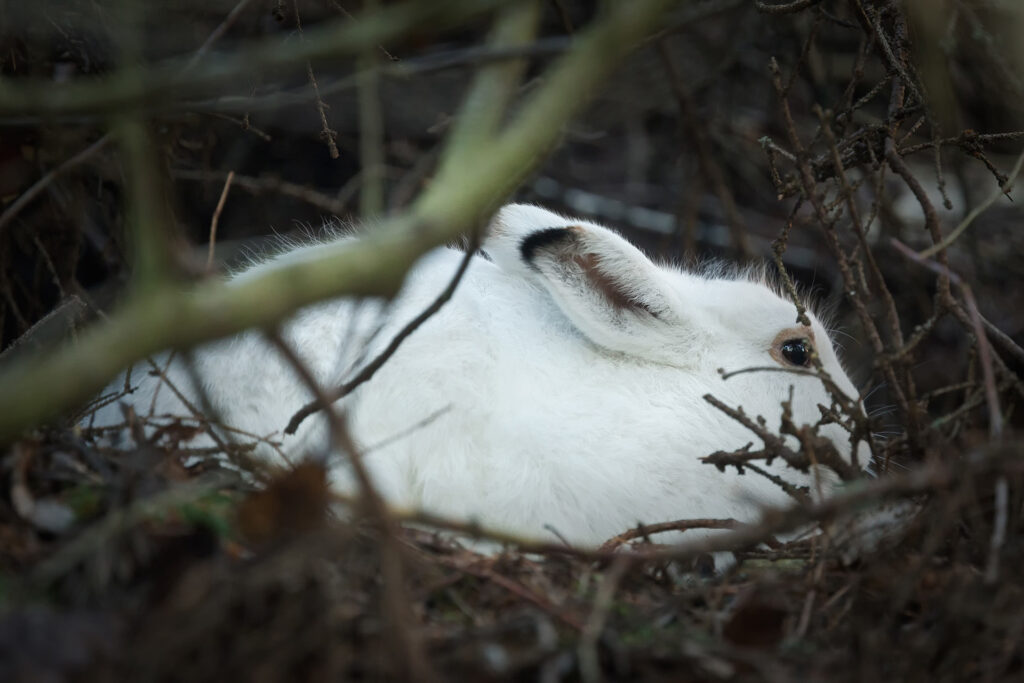 In the northern hemisphere, winter is a time of frost, ice and snow. Officially, the so-called thermal winter begins when the daily mean temperature drops permanently below zero. On Ruissalo, this usually happens in late November, with winter lasting until mid-March. However, the period is usually interspersed by milder spells, as low pressure fronts come rolling in from the Atlantic, carrying temperate air, rains and winds. As such, winter on Ruissalo is often characterised by alternating periods of snow cover and bare, unfrozen terrain.